Unlike any other watch brand, your watch will be built for you. Using the highest quality standards possible our expert craftsmen will create your watch from scratch. Complete with your chosen words of meaning on the back, this process will take 90 business days from start to finish.

When did your fitness journey begin? Tell us a little more about your involvement in the industry.

I started training in 2002, I did not take it too seriously back then I just wanted to pack on a little muscle. I trained with a rudimentary diet for around a year, and then I decided to approach a coach who saw zero potential in me at the time. I was a drinker and a party animal. A year later I was one of his most dedicated clients. I stuck with Perfect Physique through my fitness journey I don’t believe in chopping and changing coaches.

In terms of involvement in the industry, I was always around behind the scenes. I took my training very seriously and I always keep a strict eating regiment. Six years ago I did my first show and won overall and that was set to be the platform for my ascension through the ranks.

What has been your biggest challenge on your journey?

You know I once saw a motivational poster that said “Get out of your own way” no phrase could have been truer in my case. A few months after I won the overall show, I was celebrating a new job/promotion with friends. I was drinking in excess and ploughed my car into a tree and a residence perimeter wall at a speed which was later estimated at around 140km/h.

To cut a long story short, I spent over a month in hospital, shattered ankle, damage knee, collapsed lung, face mangled and my bodybuilding dreams were in a similar state. This road to recovery was one of the most significant moments of my entire life for various reasons. It allowed me to discover who my true friends were in my darkest hour and it allowed me to focus on training and leaving the party life to those more apt to it.

After the month in hospital, I was bed ridden for a further month at home with my leg elevated, 4 surgeries to it in total with a prognosis that brought me to tears on multiple occasions….”You will never train that leg again”

Took me a few months to walk without a crutch, a few more in a moon boot, and nearly three years to squat again. I have degeneration of the bone in my ankle and it still causes me pain, but hey…..Living is easy, life is hard!

Would you prefer to watch sports or documentary? Why?

Well I supposed it would depend on the documentary or the sport. I can say with absolute certainly that I would rather watch a documentary on the mating habits of blind moles rather than watch a game of Cricket oh hell what a boring game HAHAHA. I am Chelsea fan though so I would exploit most opportunities to watch my boys in blue play.

Would you rather go to a comedy club or dance club?

I appreciate humour but it is not something I have ever felt the need to go watch live, I can easily get the DVD and it will tickle me just as much. In terms of dance clubs not so much my thing anymore. I do need to cut shapes every so often, so maybe once every two months I do the thing, then I am OK for another 2 months or so.

Growing up, was there a particular person – bodybuilder, athlete or even fictional character – who inspired you to want to look like them?

How can you ask me a question like that??? Do you have any idea how difficult it is going to be for me to select just one?? How do I select between the superior musculature of Dragon Ball Z’s Vegetta or the sheer dominance of Akuma from Street Fighter LOL

Growing up in that time there was a definite focus from illustrators and gamers to depict characters in their most exaggerated forms. I also really admire the bodybuilders of the 90’s, Serge Nubret, Tom Platz, Lee Haney and the Arnie’s of the world.

I am not a fan of excessive mass; I appreciate the labour, but would not want to look like that.

What’s the #1 most played song on your iPod?

Deadmau5-Aural Psynapse, I can’t explain it, I cannot tire of it. This tune pulls on everything at once; it has a calming effect as well as a motivational uplifting one. I listen to it and I just know everything is gonna work out just fine. This tune could not have been more aptly titled; it literally does something to my synapses.

What chore do you absolutely hate doing?

I have been dieting and training for 12 years now, and I tell you…..cooking is getting old hey. The flip side of it is that I have trust issues, I could let someone else cook, but I would have to portion the meals myself.

Who would win in a fight between Spiderman and Batman?

Let us not forget that Batman is merely a private investigator with deep pockets. The man possesses no super powers, no mutations. He has a pretty belt and nice toys but Spiderman is a freak, he would beat seven shades of shit out of Batman. Don’t get me wrong, Batman is one of my favourites, but in a fight with Spiderman, Batman is going to push his medical benefits to their very breaking point.

Are there some myths about bodybuilding that you would like to break down?

No, not really, the myths are created by people and people should do their research. If you find info the myth will become fact, if you don’t find info call bullshit.

We live in the age of information, there is no room for ignorance and people must stop acting like lemmings while claiming to be top of the food chain.

If you could make a change to the bodybuilding industry what would it be?

It is basically already happening, it is my biggest bug bear. Cross federation competitive restrictions. As athletes we don’t get much remuneration from competing, so why restrict us. It is counter intuitive we need as much exposure as possible.

Enter the characters following the "-" (dash) marked on your watch caseback.

I am very satisfied with this atilla watch .. 43mm is big enough, very cool✨✨✨✨

Great looking watch and the quality is fantastic. The band is nice and big and is well supported on your wrist. I just need to buy another one, so I have two.

This is the second watch I've purchased from S-Force and yet again an absolutely quality watch. You can tell that everything from the look of the watch to the tiny details are done with professionalism and precision. The only small issue I had was the length of time it took to receive the watch. But due to this, S-Force was kind enough to send me two very cool gifts to compensate. Would 100% buy another 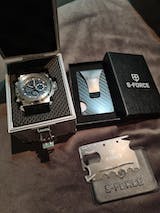 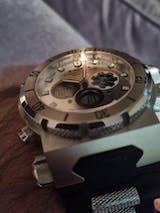 Far beyond my expectation