Unlike any other watch brand, your watch will be built for you. Using the highest quality standards possible our expert craftsmen will create your watch from scratch. Complete with your chosen words of meaning on the back, this process will take 90 business days from start to finish.

Very rarely do people have the ability to look at their life, in every aspect, and decipher what to discard and what to maintain in the level that Kris Gethin has been able to.

Born in Wales and, presumable, immediately running the "Rock and Roll" lifestyle, Kris was living his life. Partying, racing Motocross and doing what any ambitious young man does. Soon, if you can believe so, he got .... bored. Bored of the partying, the night life, the women and decided it was time to make a change. He found it in his very own Kris Gethin way; a personal trainer on a cruise ship.

Party jumpin' much? Maybe, but this is what began his journey to realize his goal to live to be 100.

Soon after, Kris was all over the world. He had found solace in bodybuilding and began a tour of America for a while ( while almost losing his job, getting deported, etc. Living on the edge kind of stuff ). It was around this time, he soon began to take a much bigger interest in himself.

Kris has a famous saying, " Don't Guess. TEST!" and he stands by this on the platform of his own personal health and his supplement line, Kaged Muscle. It was here, he began testing himself for everything. Food allergies, deficiencies, and such. Now, he's an optimized machine and here's something you can take away from this man's slight obsession,

Pay attention to your body.

It's the only one you get and it's your sole indicator when something truly is going good or bad. Invest the money to get your blood work done and find out what your body is lacking.

If you have physical goals, you need physical action.

Genetics and talent are nice, but they only compose a slight percentage of the picture. It's all about action. Scratch that, CONSISTENT action. Everything you do, not just say or think about, is going to make all the difference.

A lot of people have gotten away from this since school and that's a shame. Read, read and read some more. Optimizing your body isn't about what you do in the gym, it's about what you do OUTSIDE of it. Indulge your mind in as much training as you do your body.

take in everything you can possibly take in via headphones if you must. Between YouTube, Podcasts and Audio Books, you have nothing but excuses. ( and we already know where those get you )

Kris says, " I don't count reps. I make them count. " which explains the mentality of the body builder. It's not just going in, throwing weight around and calling it a day. There's method behind the madness and it's not different than reaching your goals. Doing something methodically, be it some sort of routine, habit, etc. Something that will bring you closer to where you need to be. If you're not doing so, then why even have goals in the first place?

It's not always about winning, it's about the experience

Every experience gives a "win". For me, it's never been about being the best; it's always been about getting out there and making things happen on my terms and expectations. Even today, as I train for an Ironman, I could give a shit less if I win or what my time is. I'm more concerned with finishing the race and looking like a bodybuilder whilst I finish.
At the end of the day, Kris Gethin may indeed not live to be 100, but he'll have a solid 90 years worth of experience that counted. Every single time. To me, that's better than achieving the goal.

Enter the characters following the "-" (dash) marked on your watch caseback.

High quality and high beauty🤩 thanks a lot ! 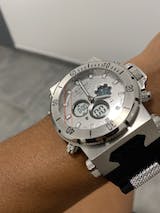 It’s a gift I got for my father in-law, I am in aww but when do give it to him that should be priceless!